Gamry Instruments is pleased to announce the publication of a manuscript highlighting the capabilities of the Gamry eQCM 10M.

Following are some highlights of the publication: 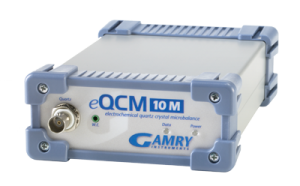 The electrochemical quartz crystal microbalance (EQCM) and probe beam deflection (PBD) have been widely used to study interfacial processes in molecular solvent-based electrolytes. However, there has been limited use of the EQCM and none of PBD in room temperature ionic liquids, including deep eutectic solvents (DES). Here we explore the use of the combined EQCM/PBD technique to the study of Ag and Sn electrodeposition from a DES comprising a 1:2 mixture of choline chloride and ethylene glycol. While overcoming the effect of viscous loss in the acoustic wave (EQCM) part of the experiment is understood, the optical (PBD) technique fails to provide a meaningful response in slow scan rate voltammetric experiments; this contrasts sharply with the straightforward behavior seen in aqueous media. Solution transport considerations reveal this to be a consequence of long surface-to-beam transit times in the viscous DES. The problem can be overcome by operating at scan rates 1-2 orders of magnitude slower, permitting application of this powerful technique to novel media of technological interest. The PBD responses reveal unanticipated chemical effects: multiple complexes in the Ag system and solubility limitations in the Sn system, neither of which is evident from the electrochemical or QCM responses.