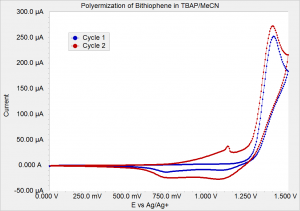 Once the film was deposited, the cell was washed with MeCN and then refilled with monomer-free electrolyte. Cycling of the polymer film revealed a broadly shaped couple at approximately 1 V as shown in Figure 2. Mass increases during oxidation and decreases during reduction, respectively, yet does not return to the initial value indicating some loss of solvent, electrolyte or polymer film. 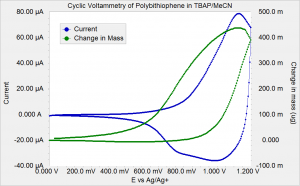 Figure 2: Mass and Current versus Voltage for one cycle of polybithiophene in 0.1 M TBAP/MeCN. Scan rate was 100 mV/s

Echem Analyst™ calculates mass changes based on dFseries, the change in series resonant frequency, using the rewritten Sauerbrey1 equation below

where Δf is the change in frequency and Cf is the theoretical calibration factor, 226 Hz cm2/µg, for a 10 MHz AT-cut quartz crystal. Mass change plotted against charge for a cycle in monomer-free electrolyte reveals information about mobile species during oxidation and reduction. Figure 3 shows the change in mass (Δm) versus the charge (C) for the first redox cycle.