Corrosion can be viewed as the natural return of metals to their ores and will occur anywhere a galvanic cell or field can be or has established.  To establish the field all that is needed is two dissimilar metals that are connected directly or indirectly by an electrolyte, such as water. This is the same chemical reaction that occurs within a battery.

Nearly all metals will corrode to some degree. The rate and extent of the corrosion depend on the degree of dissimilarity of the metals and the physical and chemical characteristics of the media, metal, and environment. In water that is soft, corrosion occurs because of the lack of dissolved cations, such as calcium and magnesium in the water. In scale forming water, a precipitate or coating of calcium or magnesium carbonate forms on the inside of the piping. This coating can inhibit the corrosion of the pipe because it acts as a barrier, but it can also cause the pipe to clog. Water with high levels of sodium, chloride, or other ions will increase the conductivity of the water and promote corrosion

The huge quantities of energy that were consumed in mining, refining, and manufacturing metals into useful objects can be dissipated by a variety of different routes. Utilities, especially drinking water and sewer systems, suffer the largest economic impact*. 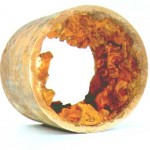 If  you live in the older part of a city where the water mains are 50-100 years old, the water you drink may well have passed through a pipe in this condition! Severe corrosion like this is more common in areas where the water is acidic. Such water comes from mountain snowmelt and runoff, and usually acquires its acidity from dissolved atmospheric carbon dioxide.

Waters from rivers, lakes, and especially ground waters from wells have usually been in sufficiently long 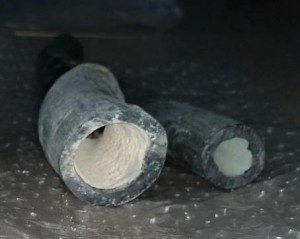 contact with carbonate-containing sediments to have been neutralized. Water-works administrators like to make the water slightly alkaline and slightly supersaturated in calcium carbonate in order to maintain a thin coating of solid carbonate on the interior of the pipe which acts to protect it from corrosion.

In the case of Flint, when they switched water sources, they failed to understand the previous source was adding a phosphate corrosion inhibitor to the water to create a protective layer inside the drinking water pipes.

Environmental engineers, and sometime users of Gamry Instruments in corrosion research, were called in to Flint.  The researchers tested the water for lead contamination and the results were staggering. (Read the complete article “How Lead Ended Up In Flint’s Tap Water” on C&EN’s website)

In a related article from C&EN, scientists worry about lead exposure in children because of the possibility of causing cognitive and behavioral issues.  Read more about how researchers think toxic metal is linked to criminal acts “The Crimes of Lead”.

If you are a researcher looking for an easy to use reliable system that gives the right answers, Gamry’s electrochemical instruments are the market leaders for corrosion testing.  Running ASTM testing is easy with Gamry’s standard list of experiments.  Using our Sequence Wizard lets you string together experiments – Click Start – then come back when finished.   Learn more about Gamry potentiostats for use in corrosion, paints and coatings applications.