Converting chemical energy into electrical energy can be done in different ways, but for chemical energy stored in various fuels like hydrogen, electrochemical fuel cells are the most direct, and have the potential to be very efficient.

The electrochemistry side of fuel cells is rather straightforward.  Hydrogen, possibly with some carbon, on one side combines with oxygen on the other to produce water and possibly carbon dioxide.  The half reactions are separated so that the energy difference between reagents and products can be harvested as electrical energy. 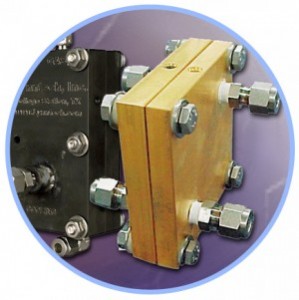 Electrochemical Impedance Spectroscopy can identify problems that limit a fuel cell’s efficiency, by helping to optimize a cell, it can determine anodic and cathodic process mechanisms.  EIS is particularly good for measuring the equivalent series resistance of fuel cells, a major source of power loss in a low impedance device. Because of the modeling capability of EIS, you can also extract information on kinetics and mass transport in the fuel cell, both of which are crucial factors to fuel cell performance.  EIS is useful in both research and QC applications. EIS of fuel cells runs into some of the same low impedance device and setup limitations that also show up in batteries and supercapacitors.

EIS is useful in both research and QC applications. EIS of fuel cells runs into some of the same low impedance device and setup limitations that also show up in batteries and supercapacitors.

Gamry has been at the forefront of affordable, high performance EIS measurements for more than 15 years. We have been making floating instruments since our inception. We understand how difficult these measurements can be and design our instruments and provide you with application notes to help users make them as well as possible.

When it comes to fuel cells, most of the basic electrochemical measurements are fairly simple. The exception to this is getting good EIS data on working cells/stacks, particularly on systems that operate at high currents. In the “Gamry Systems” section, we detail several ways to perform these tests. One involves a shared path for AC and DC current and the other involves isolated AC and DC loops that sum up across the fuel cell. In both of these tests, but particularly the first, it may be advisable to use a shunt.

Read more on the Gamry Systems for Fuel Cell Testing >>