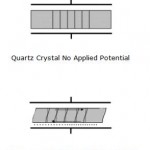 The application of an alternating potential (a sine wave in nearly all cases) to the crystal faces causes the crystal to oscillate. When the thickness of the crystal (tq) is twice the acoustical wavelength, a standing wave can be established where the inverse of the frequency of the applied potential is of the period of the standing wave. This frequency is called the resonant frequency, f0, and is given by the equation

where μq is the shear modulus (a ratio of sheer stress to shear strain), ρq is the density, and tq is the crystal thickness. The amount of energy lost during oscillation at this frequency is at a minimum. The ratio of peak energy stored to energy lost per cycle is referred to as the quality factor, Q, and is given by the equation

where fc is the center frequency and fFWHM is the full width at half max. This full width at half max is also called the bandwidth. For quartz crystals in air, Q can exceed 100,000 while in solution Q decreases to ~3000. This is because the crystal has been damped by the solution. This damping increases the amount of energy lost per cycle, decreasing Q as shown in Figure 2 below. 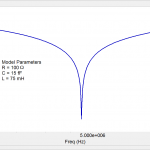 Continue reading the Application Note Basics of QCM and Equivalent Circuit Model.  You will also have an opportunity to download this note in PDF format.