Another important source for renewable energy is solar power. Photovoltaics and solar thermal collectors are most widely used.

Dye solar cells (DSCs) which are discussed in this application note are thin film cells. They are also called dye sensitized solar cells (DSSC) or Grätzel cells named after the Swiss chemist Michael Grätzel who was greatly involved in the development of new cell types.

Manufacturing of DSCs is simple, mostly low cost, and incorporate environmentally friendly materials. They have a good efficiency (about 10-14 %) even under low flux of sunlight.

However, a major drawback is the temperature sensitivity of the liquid electrolyte. Hence a lot of research is going on to improve the electrolyte’s performance and cell stability.

Figure 1 shows a simplified diagram of a dye solar cell. 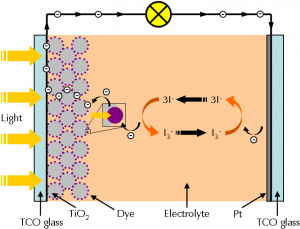 The anode of a DSC consists of a glass plate which is coated with a transparent conductive oxide (TCO) film. Indium tin oxide (ITO) or fluorine doped tin oxide are most widely used. A thin layer of titanium dioxide (TiO2) is applied on the film. The semiconductor exhibits a high surface area because of its high porosity.

The anode is soaked with a dye solution which bonds to the TiO2. The dye – also called photosensitizers – is mostly a ruthenium complex or varius organic metal free compounds. For demonstration purposes, also plain fruit juice (such as from blackberries or pomegranates) can be used. They contain pigments which are also able to convert light energy into electrical energy.

The cathode of a DSC is a glass plate with a thin Pt film which serves as a catalyst. An iodide/triiodide solution is used as the electrolyte.

Both electrodes are pressed together and sealed so that the cell does not leak. An external load can be powered when light shines on the anode of the dye solar cell.

Read complete Application Note on Dye Solar Cells.  Theory and various types of experiments are discussed that are needed for characterization of solar cells.